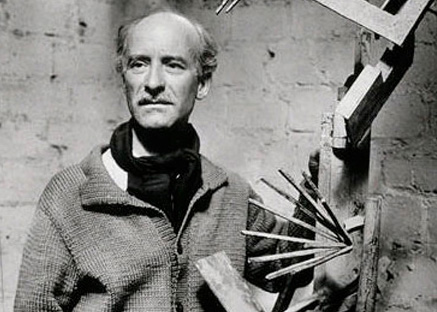 Julio Gonzalez (1876 Spain – 1942 France) is a sculptor and a painter associated with Cubism, Surrealism and Modern. Since the 30s, he is considered the founding father of modern iron sculpture. The 100% Design exhibition presents several drawings and bronzes.

For information on the available artworks, send us a request by clicking on "Info".

Julio Gonzalez was born on September 21, 1876 in Barcelona. His father was a goldsmith and a blacksmith, and her mother came from a family of artists. Very early, his father introduced him to metalworking. The family produced handicrafts and jewelry in a Catalan modernist style.

He studied applied arts at the School of Fine Arts in Barcelona and regularly exhibited his decorative work with his brother and his two sisters in general exhibitions of fine arts in Spain and abroad where they won many prices. In parallel to his goldsmith’s activity, Julio Gonzalez practiced drawing and painting and followed the evening classes of the School of Fine Arts in Barcelona.

In 1894, Julio met Joaquin Torres-Garcia. In 1899, he made his first trip alone in Paris. In 1900, the family sold the Ateliers Gonzalez in Barcelona and settled in Paris. Julio Gonzalez frequented Pablo Picasso, Manolo Torres-Garcia and Paco Durrio. He exhibited his paintings for the first time in 1907 at the Salon des Independants. The following year, he began a collaboration with the Basque sculptor Paco Durrio. Together they produced several sculptures and decorative works. In 1912, he made his first metal masks. In 1917, he worked as an apprentice welder and discovered the technique that will enable him to create iron sculptures. From 1919, he created bronze sculptures. His first solo exhibition of paintings, drawings, sculpture, jewelry and artistic objects took place at the Povolozky Gallery in Paris in 1922. He then regularly exhibited in Paris and Spain. He was the assistant of his friend Brancusi in the preparation of his exhibitions. In 1928, Picasso, who was working on metal sculpture projects, called on his friend Gonzalez help him in the creation of these works. In 1929, he exhibited his iron sculptures at the Galerie Georges Bernheim, at the Salon d’Automne, then at the Galerie de France with whom he signed a contract for his entire production.

From 1930, he regularly exhibited his works in iron and gained a notoriety and a growing recognition. In 1936, he participated in the exhibition “Cubism and Abstract Art” organized by Alfred H. Barr at the Museum of Modem Art in New York. He will subsequently participate in several exhibitions organized by the MOMA.

During World War II, he settled in the Lot, then in Arcueil near Paris where he died on March 27, 1942.