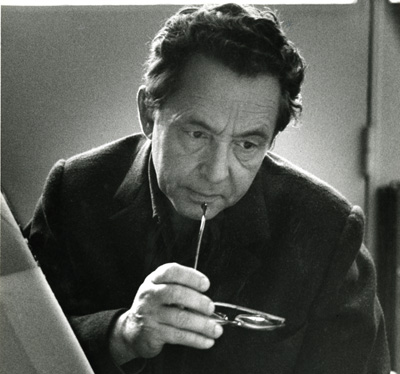 Hans Hartung is a German painter born in Leipzig in 1904.  He  died in Antibes in 1989. He is a representative of the Abstract art movement, the founder of “Tachism”  and considered one of the leaders of “Lyrical Abstraction”. Recognizable by the intensity and the rhythm given to the spots of colors on his canvas. He has been widely exhibited in Europe and America.

Hans Hartung was born in Leipzig, Germany, on September 21, 1904. He first studied philosophy and art history in Leipzig, then in 1925 he enrolled at the Academy of Fine Arts in Dresden where he continued his studies with Oskar Kokoschka. He made study trips that took him to Paris where he stayed until 1931. There he became passionate about Cubism. In 1928 he met a young Norwegian artist Anna-Eva Bergman whom he married in 1929. His first exhibition was held in Dresden in 1931.

Forced to leave Germany in 1935 in the face of the rise of Nazism, he settled in Paris where he binds with Jean Hélion and Henri Goetz. He also met Kandinsky, Mondrian, Miro and Calder. With very little financial resources, he spent his time sitting at the terraces of Parisian cafés drawing with ink on paper. From this period he kept a constant practice of the work drawn with ink, watercolor or pencils on paper, developing a genuine spontaneity, a personal gesture and a strong sense of color. In 1944, he joined the French Foreign Legion. Wounded in combat, he was amputated with one leg. He was naturalized French in 1946.

At the end of the war, his painting was abstract and lyrical. Covered with hatching and stains, it expressed his suffering. He worked with ink, oil and pastel. He is recognized as the founder of Tachism and a precursor of Action Painting. In 1952, a retrospective of his work was shown at the Basel Museum. In the 1960s, he had numerous exhibitions in France, Italy, Canada and the United States. He worked on large formats with touches of scratched or combed acrylic painting. He settled with his wife Anna-Eva in Antibes in 1968. Several retrospectives were devoted to him in the 70s and 80s in Cologne, Berlin, Munich, Düsseldorf, New York, France and Norway. Hans Hartung was elected to the French Academy of Fine Arts in 1977. In 1981, he was awarded the Kokoschka Prize in Austria. In 1984, he received the Cross of Grand Officer of the Order of Merit of the Federal Republic of Germany. In 1989, he was raised to the dignity of Grand Officer of the French Legion of Honor.

Hans Hartung died in Antibes, South of France, on 7 December 1989.