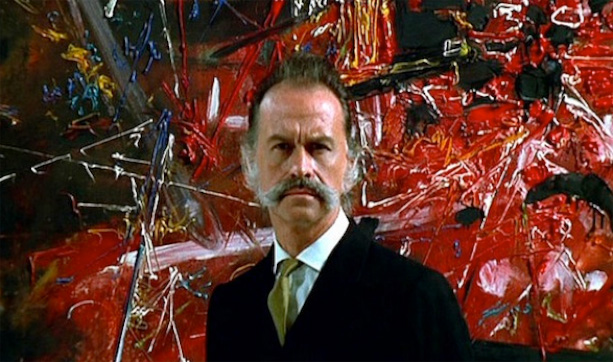 Georges Mathieu is a French painter born in Boulogne-sur-Mer on January 27, 1921. He studied literature, law and philosophy at the University of Lille, then began painting in 1942. Around 1944-1945 his painting becomes gestural. He rebelled against geometric abstraction and organized in 1947 a series of manifestations aimed at the liberation of art. He named this movement Lyrical Abstraction.

Creator and one of the leaders of this sub-variant of Art Informel, Georges Mathieu painted in the 1950s tachist works inspired by the history of France. He exhibited in Paris and staged himself in public painting events in which he used a free style, without any preliminary outline, in the manner of a calligrapher. These events had great success in Japan (1957). As early as 1959, retrospectives of his works took place in the museums of Cologne, Basel, Krefeld, Neuchâtel, Geneva. He traveled extensively in Brazil, Argentina, Lebanon, Israel, Canada and throughout Europe.

In the 1960s, he designed furniture, jewelery, tapestries, dishes, posters and a new piece of 10 francs for the Monnaie de Paris. In the 1970s and 1980s, he exhibited regularly throughout the world (France, Germany, Canada, United States, Brazil, Bahrain, Tunisia, Singapore, Netherlands, Belgium, Switzerland, Italy and Japan). His graphic evolution led him to eliminate the central composition in favor of a distribution of forms invading the entire surface of the canvas. He inaugurated a new aesthetic based on semantics: “the sign precedes its meaning”.

His work is present in at least seventy-nine museums and public collections throughout the world.